We gave ourselves a day to rest off our jetlag and also look around the town. At the Pilgrims´Office the volunteer from Holland took his job seriously and briefed us thoroughly on the route from St Jean to Roncevalles in Spain.

St Jean is a very pretty town with old high walls around the small old town where many small shops provided us a lot of chance for shopping but we obviously could do little knowing we would have to carry everything with us the rest of the walk.

We kept in touch with the weather but the changeability of mountain climate must make the meteorologists job somewhat dicey. Despite the favourable forecast, it was raining lightly when we started the next day (Friday 25 April) and the drizzle continued throughout our walk up to Orisson, 800m above and 8km away from SJ.  With the effort of the climb we were drenched in perspiration and cold by the time we arrived 3 hours later.

While the solitary accommodation building at Orisson is cute to look at and pretty when the sun reappeared as soon as we arrived, the conditions were basic with six of us sharing a room and the room heating did not come on until later in the evening. Still the ¨sufferings¨ were soon forgotten with the comaraderie among the fifty odd pilgrims especially over dinner. Large numbers were from USA, Germany and France, and we found company with a Sydneysider and a father and son team from Adelaide.

This morning leaving Orisson, it was beautiful weather for a while but again the clouds moved in and we had some rain as we continued to climb up. As we got higher the windy became quite challenging as well. There was no where to rest and have a cup of coffee anywhere in this section of the Camino, but whenever sunlight breaks through the view was breathtaking.

We struggled to the top (a climb of 500m to over 1420 m in altitude) crossing over to the Spanish side of the mountain range, before we began the downward descent which was quite steep. Although we were discouraged from taking this direct route, the lack of alternate signs meant that we did precisely that. It turned out to be not too difficult and the reward was the beautiful birch forest all the way down to Roncevalles.

We stayed at the refugio at the Roncevalles monastery. The 10 euro per bed in a flashy new accommodation building that takes hundreds of pilgrims each night was worth every Euro cent given the clean conditions, good heating, showers facilities and cheap meals!  No wonder the reception desk when we arrived was like Town Hall station at peak hours.

With limited data facilities, photos will be posted another time. 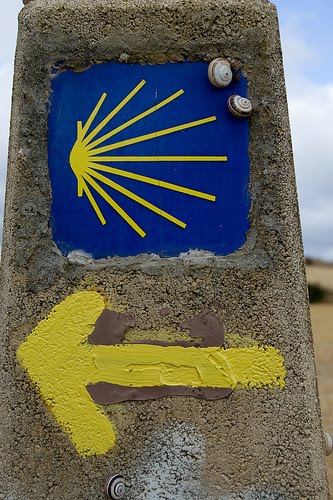